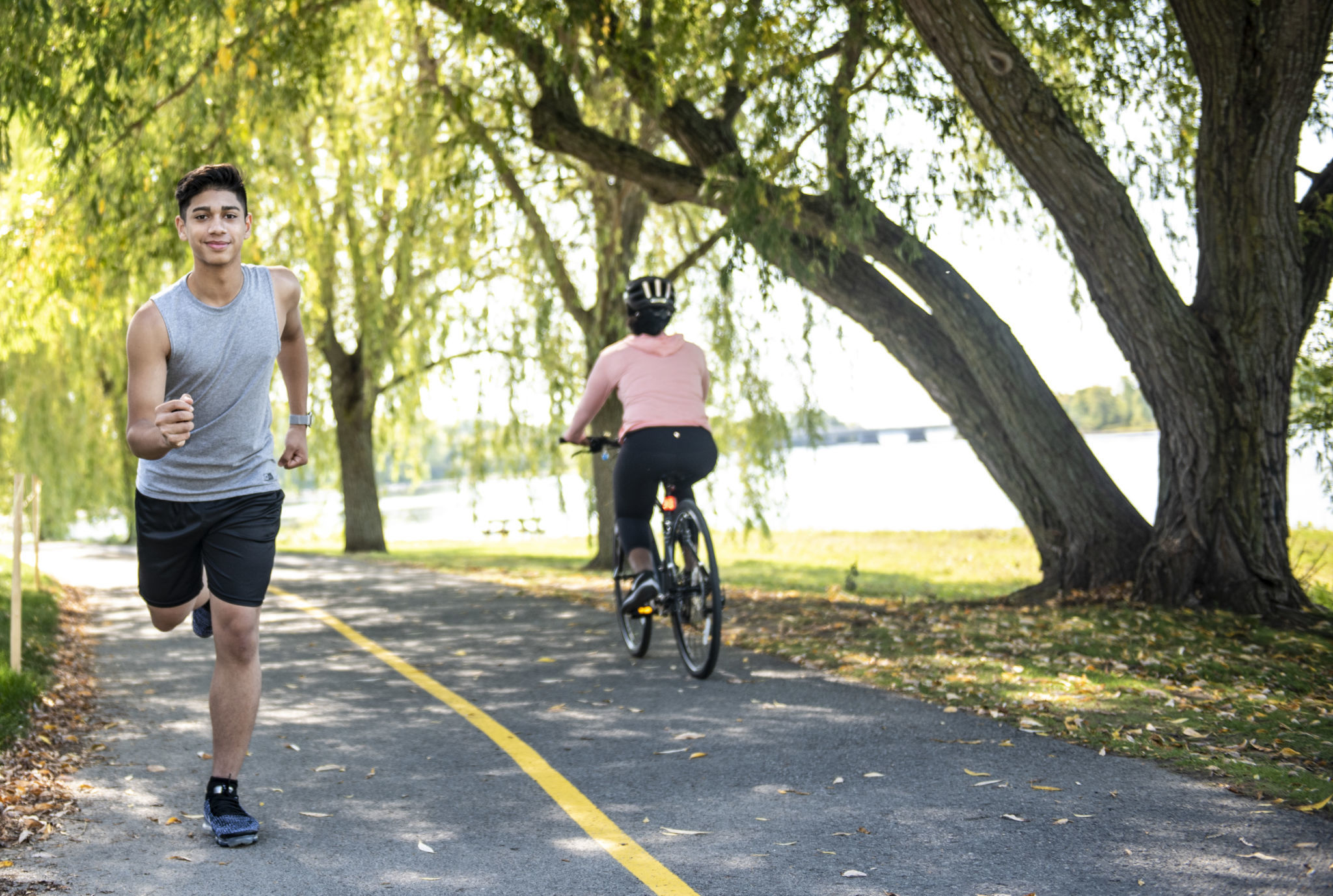 Be considerate. Know the rules. Be responsible.

The green spaces of Canada’s Capital Region are connected by more than 600 kilometres of multi-use pathways, which people use for recreation and commuting. The pathway network connects the Capital’s parks, gardens, museums and attractions, and is designed for walking, running, cycling and in-line skating.

The NCC manages 236 kilometres of these pathways, which extend from Gatineau Park, through Ottawa and into the Greenbelt. The network also links the Capital to hundreds of locations across Canada via the Trans Canada Trail, which today consists of 24,000 kilometres of multi-use trails. The pathways in the Outaouais are also part of the 5,300-kilometre Route verte network.

Great for many activities such as cycling, walking, running and in-line skating.
Launch the Interactive Map

Cycling on the Capital’s pathways

Are you planning an outing by bike? The following paths will take you past some of the best scenery in Ottawa and Gatineau.

Visit the Canada Agriculture and Food Museum along the way.

Explore Shirleys Bay, and stop for a picnic by the shore of the Ottawa River.

This 31-kilometre pathway follows the Ottawa River and passes a number of Ottawa’s attractions. Stop along the way at the Canadian War Museum, Parliament Hill and the Ottawa Locks at the northern entrance to the Rideau Canal, a UNESCO World Heritage Site.

Delight your senses on this pathway, as you pass through Commissioners Park and its extraordinary flower displays.

Bike to Vincent Massey Park, where you can stop for a picnic or a barbecue.

Cycle along the northern side of the Ottawa River, and take in spectacular views of Parliament Hill and the Canadian Museum of History.

The paths are shared with in-line skaters, runners and walkers, so be sure to follow the rules for courtesy and safety on the pathway.

Where to Get Your Copy of the Map

Most of the pathways are accessible for people with impaired mobility. However, other than the paths along the Ottawa River, the Gatineau side of the network is very hilly and is therefore not recommended.

The Capital Pathway is shared by many users, and very popular for commuting to work. Keep the paths safe by following the rules for courtesy and safety on the pathways:

Every spring, as soon as the snow melts, the recreational pathways are cleaned and repaired by our maintenance teams to be ready for use. The pathways are not maintained during the winter, with the exception of those on both sides of the Rideau Canal. The NCC oversees rehabilitation work on the 236 kilometres of the Capital Pathway network for which it is responsible.

Because a green city depends on sustainable transportation, cycling is important for Canada’s Capital Region. The NCC is working closely with the City of Ottawa and Ville de Gatineau to learn from world-class cycling cities. Cycling will be an important part of the Plan for Canada's Capital 2017-2067.

The Future of the Capital Pathway: Let's Talk !

Update on Public Use of NCC Assets

Section Of the Rideau Canal Eastern Pathway Closed Until Fall 2019