Nepean Point is one of the most spectacular lookouts in the National Capital Region, making it a key Capital destination.

The NCC is currently redeveloping Nepean Point to create a lively, 21st century park, in the heart of the Capital. The site is closed until summer 2023 to ensure the safety and security of the general public during the redevelopment.

The site has been under construction since November 2019. We have completed the demolition of the Astrolabe Theatre and the removal of monuments and statues, including art sculptures from the National Gallery of Canada. These have been either relocated or are now in storage and undergoing restoration. The plan is to reintegrate them as part of the redevelopment.

In April 2022, the NCC’s Board of Directors approved changes to the site plan. These include the following:

The Samuel de Champlain and Anishinabe Scout statues were removed to prepare for construction. As part of this redevelopment, the NCC will move the statues to their new locations within the park.

The “Big River Landscape” concept plan guides the redevelopment of Nepean Point. It is the winning entry, by Janet Rosenberg & Studio, from the 2017 international design competition.

The design will improve the park in terms of universal accessibility, interpretation, landscaping and new vistas. It also features:

Through coordination, the project team has refined the winning design. The revisions align with refined cost estimates and changes in the surrounding context. 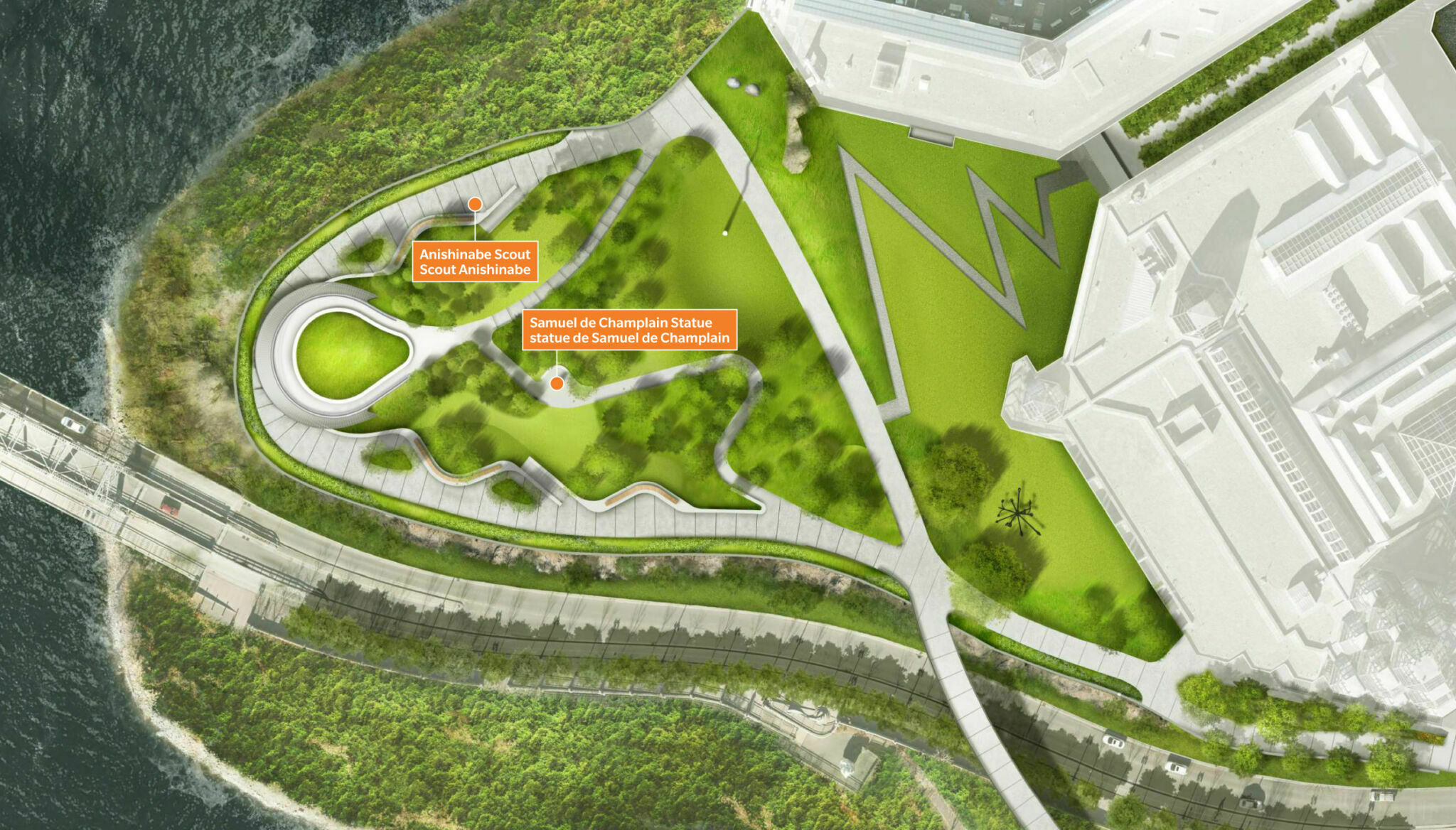 Throughout the project, the NCC consulted the public, federal stakeholders and First Nations partners.

In 2021 and 2022, the NCC held site visits and work sessions with federal stakeholders and representatives of Kitigan Zibi Anishinabeg and the Algonquins of Pikwàkanagàn. The sessions focused on the approach for the interpretation elements and the final locations for the statues.

Part 1 of the plan focuses on the park’s landscape design, including the pedestrian bridge to Major’s Hill Park.

Features of the design include the following:

The perimeter wall and landscape ha-ha feature will offer spectacular unobstructed views of the Capital, and will increase biodiversity in the plantings at the park’s edge.

Part 2 of the plan will focus on the entrances to Nepean Point park from Sussex Drive through the National Gallery of Canada property, and the reconfiguration of St. Patrick Street. It is part of a separate project which will need coordination through various federal and municipal partners.

We launched the Nepean Point redevelopment in 2014. The project is ongoing.

2014: Launch of project
A public planning workshop helped us develop a vision and design elements for Nepean Point

2020: Board approval of revised concept

2021: Board approval of the remaining design elements

In 2021, the NCC began implementing many elements of the park:

2022: Board approval of the site plan amendment

The project is scheduled to be completed, and the site reopened by summer 2023.

The redevelopment implementation of this project is part of the NCC’s major infrastructure projects made possible with the Government of Canada’s $52.4-million investment from the 2020 federal budget.