In 2021, the NCC built a new pathway connecting the Capital Pathway along the Ottawa River to the Pimisi and Bayview O-Train stations at LeBreton Flats. The creation of this pathway is part of the new LeBreton Flats Master Concept Plan, which was approved in 2021. 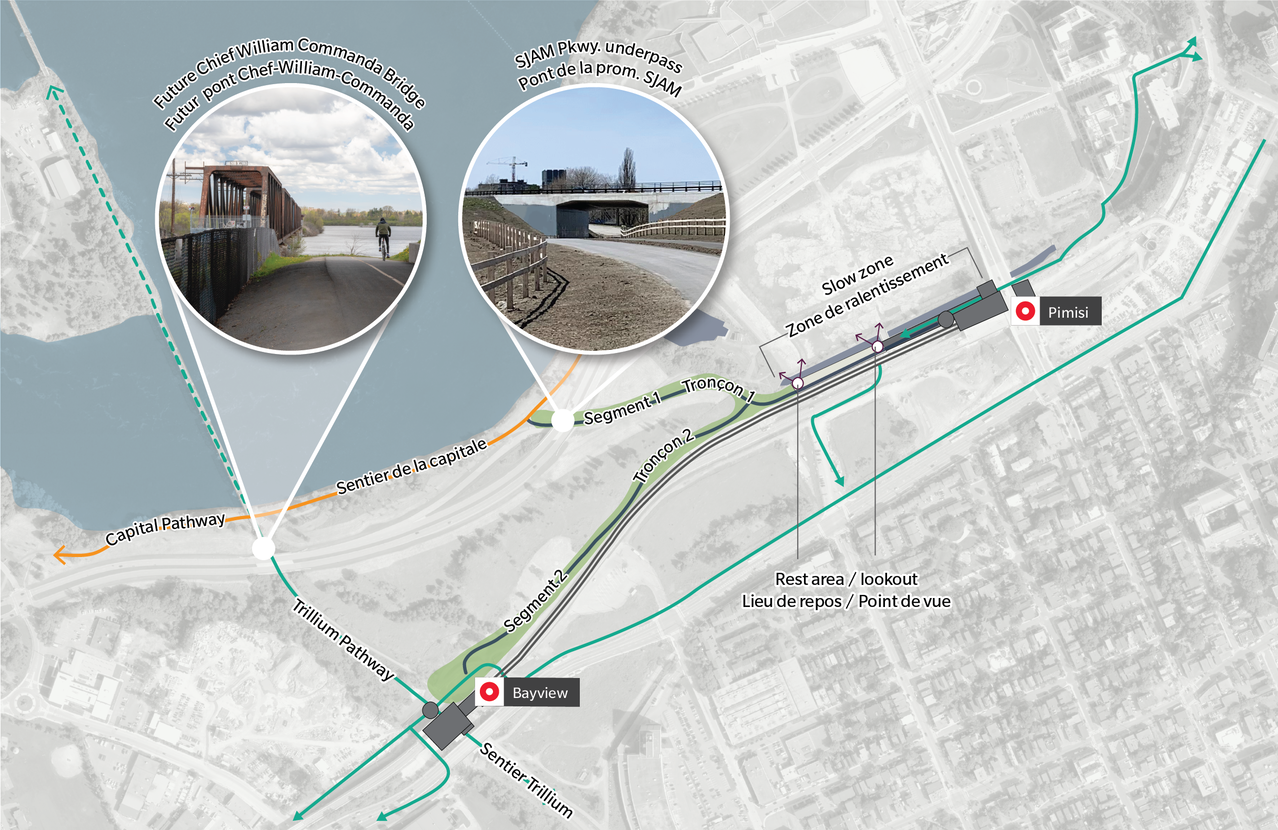 The pathway opened to the public in December 2021, following construction work which was carried out in the summer and fall.

The work undertaken included the following:

Remaining works, such as pavement painting, landscaping and signage installation, will be completed in spring 2022. 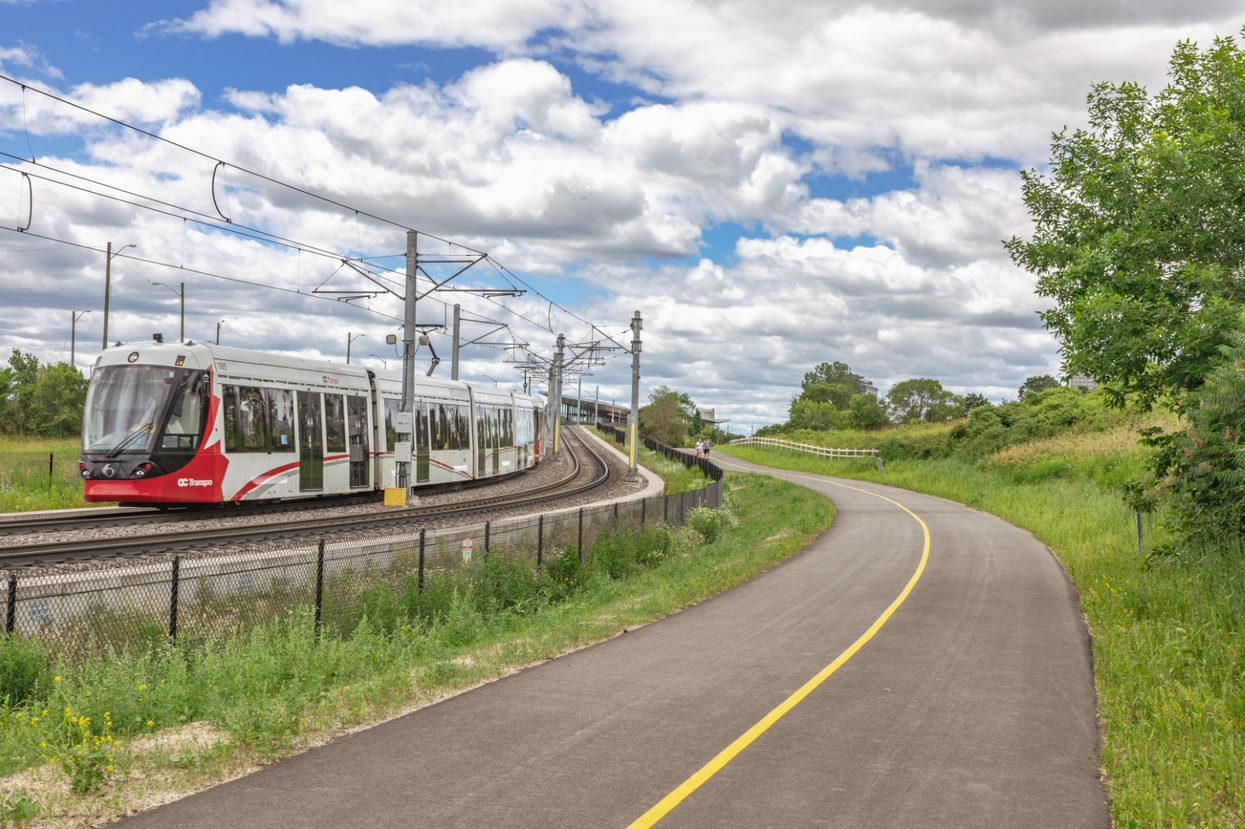 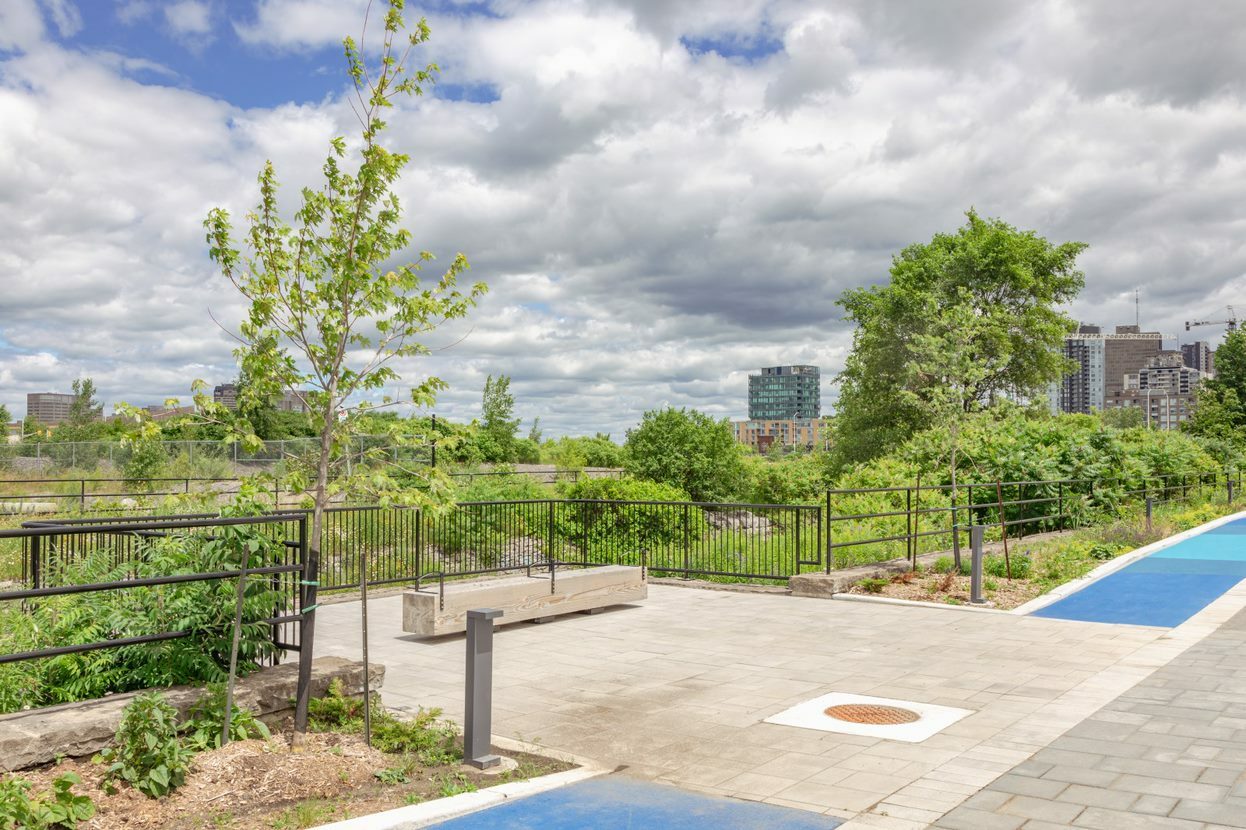 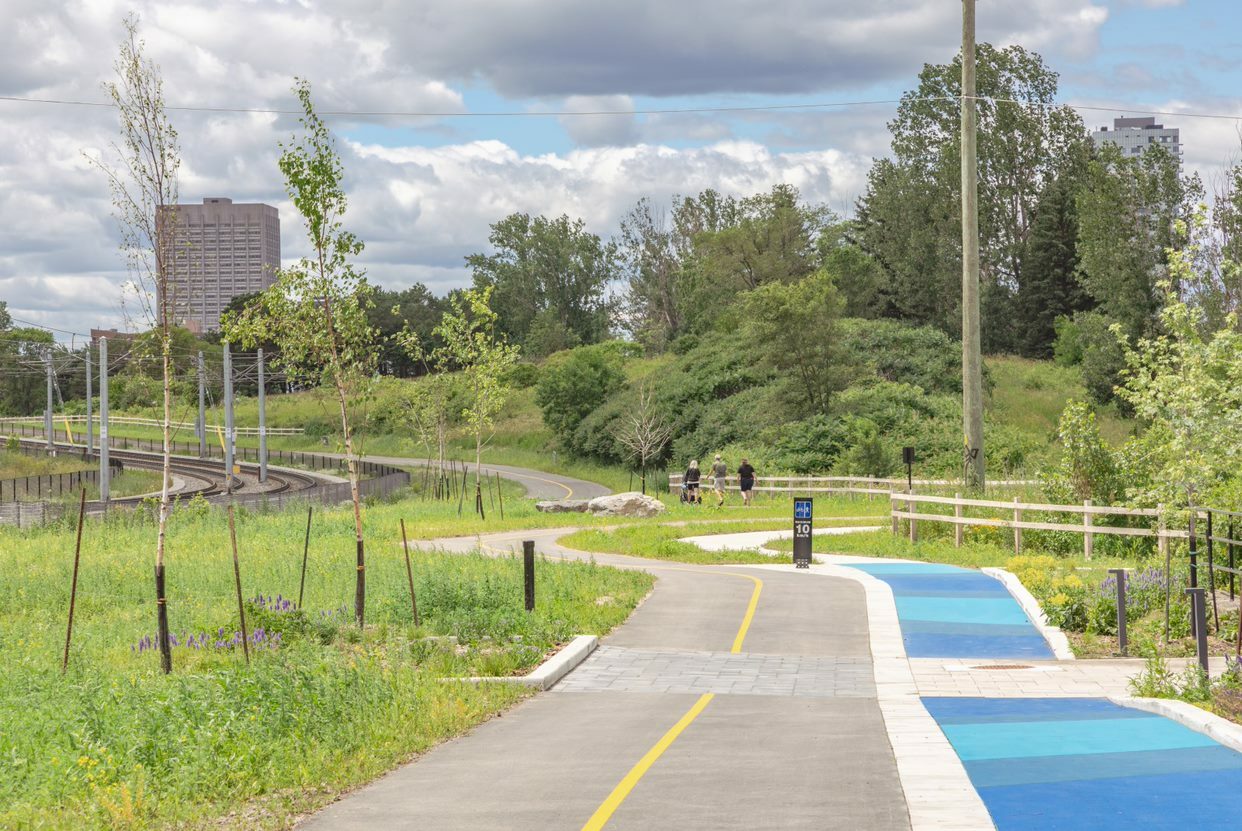 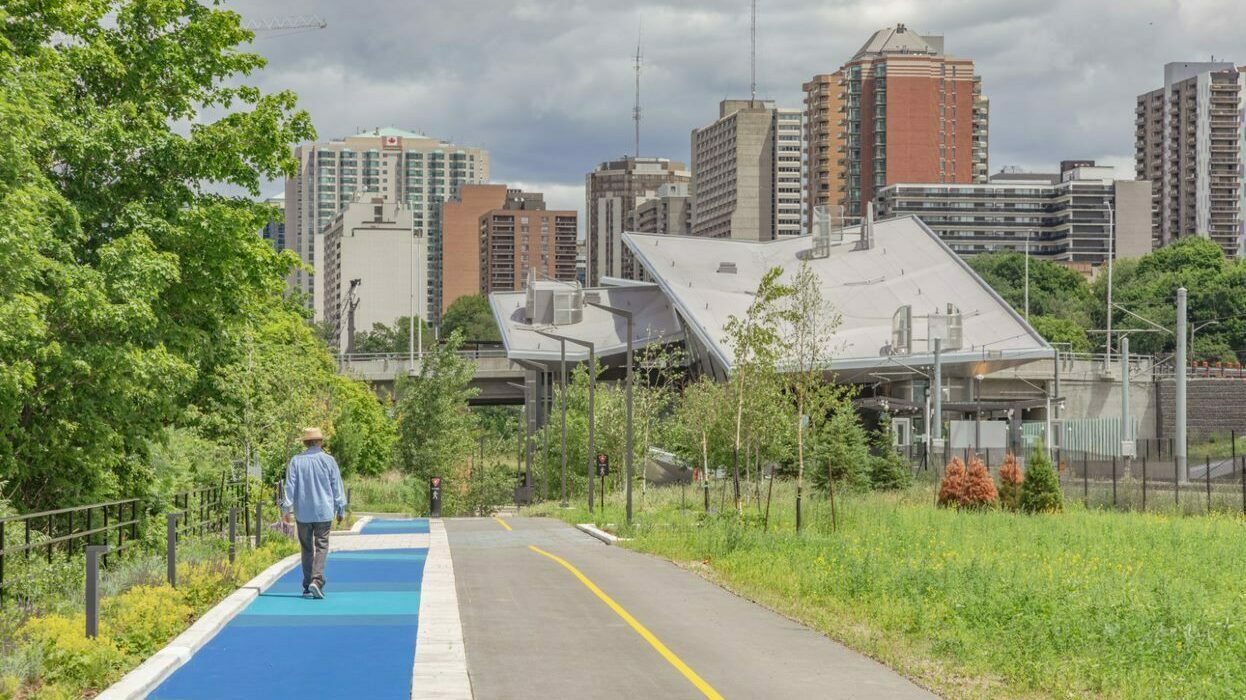 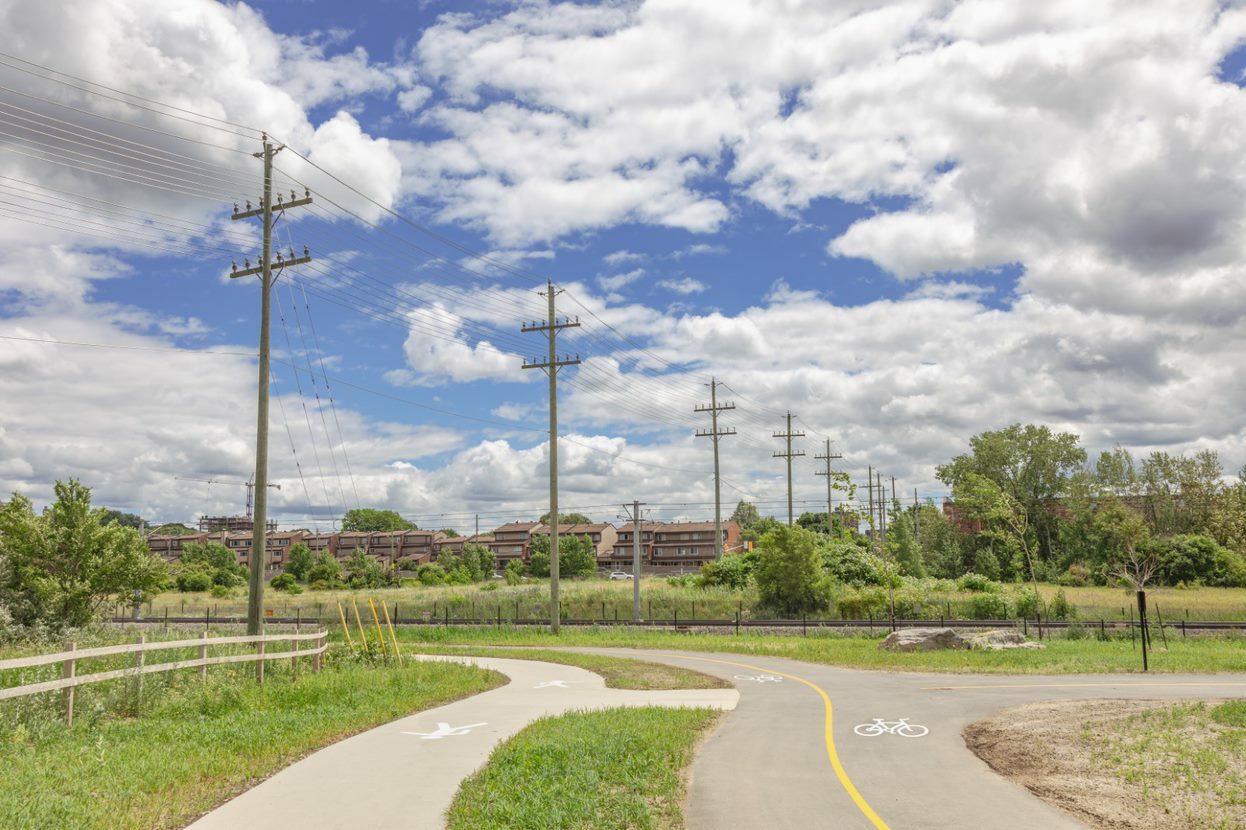 The NCC gathered feedback on the pathway project during a public consultation held from December 2020 to February 2021. All the feedback, along with responses to comments, are summarized in the consultation report.

Segment 1 of the pathway connects from the Ottawa River Pathway along the historic aqueduct to the Pimisi O-Train station. It features a segregated bikeway and pedway, separated by a landscaped median. This segment includes a “slow zone,” west of Pimisi Station, with places to sit, rest and take in the view of the aqueduct. The NCC is considering future uses and programming for this area, such as concession vendors, small events or other uses.

Segment 2, connecting from Segment 1 to the Bayview O-Train station, is a four-metre-wide multi-use pathway.

The pathway will connect through the future Parks District of LeBreton Flats. It will provide access to the future Capital park, active park and urban playground areas in the Parks and Public Realm Strategy of the LeBreton Flats Master Concept Plan.

The existing and surrounding area is a brownfield site which contains contaminated soils, including a former municipal landfill. As part of this project, we replaced soils in the slow zone to remediate the area.

Remediation of the remaining soils will be undertaken when the area is developed to its ultimate use, with new parks and public realm surrounding the pathways. Until that time, fencing and landscaping will be used to keep people on the pathway.

During the 2021 winter season, the pathway will again be groomed as part of the Kichi Sibi Winter Trail. Future approaches to winter maintenance will be determined based on public consultation and the ongoing pilot project.