You are here:
Estimated time to read: 3 minutes

Whether they have roots, wings, fins or hooves, all living things — humans included — sense when spring is around the corner. Animals in particular undergo certain changes in behaviour that signal spring is coming.

Here are some of the ways that local wildlife species greet the arrival of warmer, milder weather in the Ottawa–Gatineau region.

On the forest floor

Come spring, hibernating animals — like bears, bats, and some squirrels and chipmunks — wake up from their long winter naps. Animals that hibernate sometimes do wake up in the winter months, but not for long periods of time.

In the spring, though, all animals that hibernate leave their deep sleeps for good. They start to take advantage of the more abundant food supply and comfortable conditions that spring offers. Spring also welcomes new baby animals to the forest floor, such as deer and coyotes.

If you encounter wildlife, be respectful: keep a safe distance, observe from afar and don’t feed any animals. Learn other tips to respect wildlife in natural areas.

One of the first songs audible in spring is certainly that of the chorus frog, one of the smallest and most endangered species in Canada. But don't let its small size fool you, its unique call can be heard up to 1 km away!

When ponds thaw, keep an eye out for wildlife like frogs, toads and salamanders. Many amphibians — creatures that live part-time in the water and part-time on land — lay their eggs in bodies of water.

They head to ponds to mate when the water is no longer frozen. Sometimes they even go to the same pond where they themselves hatched. It’s also possible for hundreds or even thousands of these amphibians to go to the same pond on the same night. When this happens, their mating is coordinated with the phases of the moon, which increases their chances of finding a mate.

If you’re biking or driving near a pond or another body of water, you may see frogs, toads or salamanders trying to cross the road. Help them make it to their breeding and hatching grounds safely by obeying the speed limit and paying attention to your surroundings.

In the sky and in the trees

One of the most common symbols of spring is the return of migrating birds. Birds that migrated south for the winter, like loons, Canada geese and peregrine falcons, return to the region to nest and reproduce.

Birds also become more active and vocal in the springtime. They often use their songs to attract mates or to mark out their territory.

Have you been hearing hammering noises instead of chirping? That could be a woodpecker. Male woodpeckers drum on trees, hydro poles, and sometimes on chimneys or metal roofs in hopes of attracting females.

In the spring, you may notice more birds in urban areas as well as in more urban natural settings. Suitable nesting habitats and newly available food, such as fruits, seeds and insects, attract birds. Food sources give females the energy they need to produce eggs and to then guard their nests while their babies are young.

If you’re out in the National Capital Region’s conservation areas, such as Gatineau Park or the Greenbelt, be sure to follow any instructions and obey closures that may be in place to help protect wildlife. Some areas may temporarily close to keep visitors away from birds’ nesting sites, including those of loons and peregrine falcons. These advisories are issued to protect wildlife.

It’s not just us humans who celebrate spring by spending more time out and about. This spring, whether you’re on a hike in one of the green spaces in Canada’s Capital or on a walk in your neighbourhood, you might see more animal activity than you did during the winter.

Be sure to respect the animals and give them space so they can make the most of springtime, too. Oh and don’t forget to keep an eye out for spring wildflowers on your next outing! 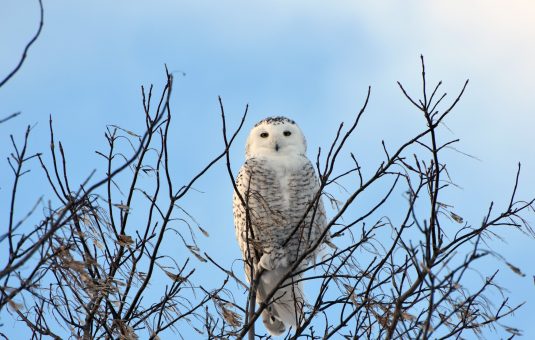