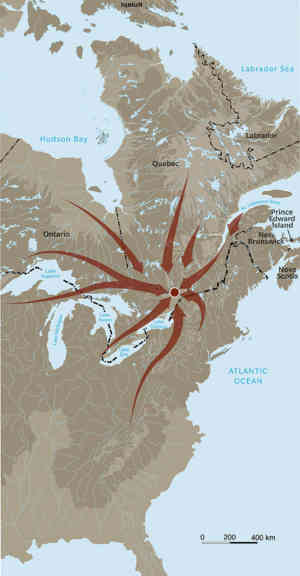 As far back as 9,000 years ago, Indigenous people inhabited the region. Nomadic peoples lingered here to portage and to exchange goods. Archaeological evidence shows that this region was a lively trade hub some 6,000 years ago. Current place names reflect the names that the Anishinabeg peoples gave to locations for meeting and exchanges, such as Ottawa (the road that walks) and Kitchissippi (great river). Obstacles to navigation led to settlements on portage heads. One of the mightier obstacles was the Chaudières Falls (Akikodjiwan or Kîshkâbikedjiwan), a place of ceremony, as witnessed by Samuel de Champlain in the early 1600s.

The contemporary capital’s origins date from the construction of the Rideau Canal after the War of 1812, which secured a safe shipping route between Toronto and Montréal. Colonel John By, commander of the Royal Engineers digging the canal, built a small settlement on that route in the location that became Ottawa. Called Bytown, this frontier town on the border between Upper and Lower Canada grew with the lumber trade. In 1855, it was renamed Ottawa and, two years later, Queen Victoria designated it the capital of the united Province of Canada. At that time, it had a population of only 16,000. The Capital Region’s geography was a principal reason for its selection: joining the two Canadas at a point safely distant from the American border.

Despite these advantages, not all of the young nation’s prime ministers were satisfied with their capital. Canada’s seventh prime minister, Sir Wilfrid Laurier, challenged his government to improve what he deemed, in 1884, “not a handsome city.” So began more than a century of federal city building. This plan builds on the mission of our predecessors to create a fine and worthy capital.